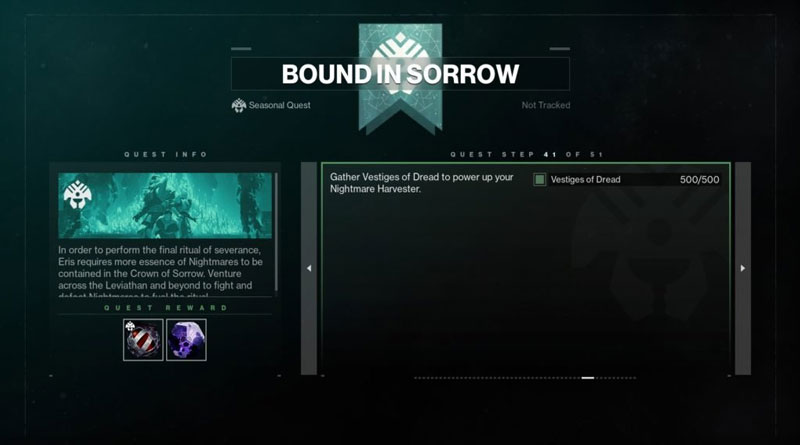 If you’ve reached Week 1 of Destiny 2, you’ve most likely already finished the first Bound in Sorrow quest. You’re now ready to take on the other two Week 1 quests, Vestiges of Dread and The Lost Sector. Before you proceed to Week 2 quests, though, you’ll need to make a few decisions. Here’s a guide to Week 1 quests.

In Destiny 2, there is a new season-long questline titled “Bound in Sorrow”. It contains around thirty to forty steps, and requires the player to gather around 500 Vestiges of Dread, which are earned by completing various activities in the Haunted Season. After you have gathered enough Vestiges, you can then head to the Crown of Sorrow and talk to Eris. From here, you can begin the Bound in Sorrow questline.

During the third week of the Haunted Season, you can visit HELM and speak to the Crown of Sorrow. Afterward, you can talk to Eris and obtain missions from her. The quest will continue on the fourth week. On week four, you need to gather 500 Vestiges of Dread to craft Bound Presence and Nightmare Containment. You can skip Step 24 by completing Week 3.

To get to the Pyramid, you need to complete the Bound in Sorrow quest. D2 veterans will know where to go, but new players will need an objective marker to find their way. This quest will take you through the Enduring Abyss and to the Pyramid, which is located beneath the surface of the moon. Once you arrive, you must explore the bodies of Cabal members, which can be found inside.

The Bound in Sorrow questline continues in Destiny 2’s Season of the Haunted. In Week five of the Haunted, the Guardians begin exploring Leviathan once more after their long absence. The Nightmares have returned. Meanwhile, Commander Zavala and Commander Crow become haunted by Nightmares. This Week’s questline also continues the storyline of the Guardians’ attempts to cut Calus’ connection to the darkness. It also starts Caiatl’s involvement in Eris’ Severance Ritual.

Before you can begin the Bound in Sorrow questline, you must complete Caiatl’s quest in the Moon Sanctuary. After completing her quest, you will need to talk to Eris about the Forsaken Leviathan interaction. Once you have gathered 500 Vestiges, you can then proceed with the Bound in Sorrow questline. It is important to complete this quest before going to the Moon Sanctuary to meet Eris.

The first step to complete the Bound Presence achievement in Destiny 2 is to collect 500 Vestiges of Dread. You can earn these by completing Nightmare Containments, interacting with the Harvester, and grinding. And you can also acquire them by playing Crucible matches. You can also find them on Derelict Leviathan, which you can find by exploring the underbelly of the planet.

You can obtain a lot of Vestiges of Dread in a short amount of time, especially if you have a lot of seasonal armor. It also helps to have the Visages of the Reaper buff, which increases Vestiges by 5% per piece of armor. You can also use the Crown of Sorrow upgrade menu to unlock new methods of obtaining Vestiges of Dread.

Also you can earn these in large numbers if you’ve completed a lot of activities. You can also use them as a seasonal currency or to quickly fill your bank. You can find them in derelict Leviathans or by farming bounties. In addition to doing this, you can also defeat Nightmares and destroy combatants to fill your inventory.

Getting enough vestiges is important in completing the Bound Presence achievement in Destiny 2. You’ll need to collect 500 Vestiges of Dread in order to build the Nightmare Containment. You’ll also need 500 Vestiges to complete the week’s story mission. After this, your Bound Presence will be automatically gained. You can collect these vestiges to use on the Nightmare Containment challenge in Destiny 2 – Complete The Bound.

The Season of the Haunted in Destiny 2 is an excellent opportunity for you to farm the new currency, Vestiges of Dread. These bind slanderous presences in the game and are necessary to progress the Bound in Pain quest. You will need a large amount of Vestiges of Dread to complete this objective. Fortunately, the rewards are well worth the effort.

Getting Vestiges of Dread will make leveling in Destiny 2 a breeze. In addition to the season’s first raid, you can earn more by killing enemies and completing Leviathan-specific activities. Once you’ve collected enough, you can purchase bonus loot from the Nightmare Containment. The Nightmare Containment will cost you 500 Vestiges, but after a seasonal upgrade, you can use them to upgrade your weapon.

In order to unlock the next boss, players must first clear a Lost Sector. Each Lost Sector is home to a mini-boss and group of enemies. Killing the mini-boss will unlock a cache chest containing a code to open the large treasure chest. The player can also clear more enemies to find even more treasure. A player will receive a special Emblem when clearing their first Lost Sector chest. They will also have a small chance to obtain Shaders or Emotes, which can be used in normal loot chests.

There are three Lost Sectors in the game. Each Lost Sector has a different difficulty, based on which Champion mods players have available. Also, the difficulty of each activity varies. The Conflux is the hardest and has the best chance of rewarding players with Exotic armor. While each Lost Sector is unique, there are some general tips to complete the mission. To unlock the second Lost Sector, players must defeat the yellow health bar boss two times.

The next Lost Sector in Destiny 2 is located on the Moon. It is guarded by a tormented Nightmare. To complete this mission, players must destroy the blocks surrounding the boss. If they are defeated, they will earn bonus progress. The next quest in Destiny 2: Complete The Bound – The Moon is not yet open to the public. There are also three sandbox-style looting areas in the game. Using these tips will help you unlock the next boss in Destiny 2!

The new Season of the Haunted is the fourth Lost Sector in Destiny 2. This means players will need to venture onto Derelict Leviathan to fight Nightmares. They can also perform Nightmare Containment activities to help them win. Completing the Season of the Haunted in Destiny 2 will also unlock the new Bound in Sorrow mission. However, you must be aware that the new quest is time-consuming.

The week’s first quest is “The Crown of Sorrow.” The goal of this mission is to collect 500 Vestiges of Dread. This reward is available every week. The final step is to speak with Eris at the Crown of Sorrow. The corruption has spread to H.E.L.M., but the city is still livable and maintainable. This quest will be extremely satisfying, so make sure to keep reading to find out how to complete it.

After completing the three tiers of Nightmare Containment, you’ll have to complete the nightmarish project. You’ll need to collect 500 Vestiges of Dread before proceeding to the next step of this quest. To complete Week 1 of the campaign, you’ll need to travel to the H.E.L.M. and find the holographic projector that Caiatl has sent to you.

Afterwards, you’ll have to talk to Eris again to complete the Sever – Reconciliation quest. This quest will raise your Power Level to 1,550. After doing this quest, you’ll have to travel to the Crown of Sorrow to meet Eris. After talking to Eris, you’ll receive a private message from her. She’ll guide you through the rest of the Bound in Sorrow.