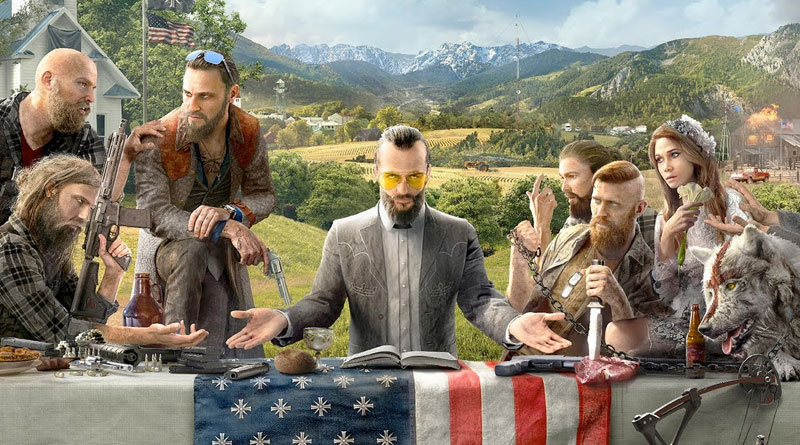 If you’re just starting out with Far Cry 5, here are some tips that will help you get a head start. In this guide, we’ll cover Characters, Weapons, Vehicles, and Maps. Also, we’ll cover perks, which are equivalent to skillpoints that can be used to upgrade your characters. Read on to discover how to use perks to help you make the most of the game!

As with Far Cry 3 and the previous installments, Farcry 5 is centered on its characters and its story, which is what makes it stand out as one of the best takes on the open world genre. It doesn’t offer a revolutionary approach to the genre, but it is by far the best Far Cry game since its predecessors. Luckily, Far Cry 5 releases on March 27 for PC, PS4 and Xbox One.

There are several key characters in Far Cry 5, including the main antagonist Joseph Seed. This antagonist is given the same level of attention as Vaas, but differs from the other characters in several ways. The first antagonist, Pagan Min, interacted with the player through radio, which made the game’s climax much less exciting. The second antagonist, Joseph Seed, is less prominent, appearing only occasionally throughout the campaign.

In Far Cry 5, there are many different weapon types to choose from. There are several types of machine guns, including the M60 and M249, which are both similar in accuracy but have different rate of fire. If you’re interested in picking up the most versatile weapon for your needs, you should look into the M60. This weapon allows you to customize your shot with a silencer and reflex scope. It’s not as accurate as the MBP.50, but it’s worth the extra money.

In addition to the standard machine guns, there are also some Special Weapons that you can use to get the upper hand over your enemies. The AK47 is a powerful rifle that can pierce a skull and cause a lot of damage. In addition to the standard weapons, there are also several guns that you can upgrade. Some of these weapons have great upgrades, including suppressors. The main assault rifle sports a Daniel Defense MFR rail and a charging handle that looks like it came from a Radian Arms Raptor.

Another weapon to consider purchasing is the Flamethrower, which is an area-denial weapon that will set a large area on fire. A special weapon to consider is the Magnopulser, which you can pick up by helping Larry Parker in Holland Valley. This weapon fires a powerful vacuum wave around you, sending enemies and allies flying in the process. These are just a few of the weapons available to you in Far Cry 5.

To repair a vehicle, simply press the square or X button while looking at it. You must have the Repair Torch on hand to perform the repair. If the Repair Torch is not available, hold R2 to look at the vehicle. Once the bar reaches the end, your vehicle should be repaired. Vehicles are unlocked after you have accumulated six perk points. While playing the game, you can buy vehicles with the yellow keychains.

Another type of vehicle that can be unlocked is the quadzilla craft. After completing Clutch Nixon’s Quadzilla mission, you can purchase this weaponized vehicle for $3,600. This vehicle can also be weaponized, making it a highly useful weapon in Far Cry 5.

There are two ways to play the map for Far Cry 5. You can play it in the arcade or explore the world. The arcade version is easier and you can play without enemies. This is known as the classic version. You can find many maps in the Arcade, and the classic version is also playable. To explore the world, you need to first purchase the Arcade. Then, you can search for maps and download them.

You can customize the game by using the map editor. The map editor in Far Cry 5 is one of the best. It is not limited to the multiplayer mode. You can change the level settings, weapons, and enemies in the map, and even customize the background of your character. The game also features an extensive tutorial mode that will allow you to learn more about the world and improve your skills. There’s also a multiplayer mode that allows you to create your own maps and save your progress.

The Resistance Meter in Far Cry 5 is an essential resource in the game. By completing story missions and destroying structures, you can fill up your meter and unlock story missions. Ultimately, you must complete all three regions to unlock the game’s bosses. In order to do so, you need to reach a certain level of resistance to take down the Seed family. But how do you fill your meter?

The Resistance Meter in Far Cry 5 works by allowing you to earn points. Getting points from the Resistance Meter is easier than you might think. You can get it by destroying bright red structures, such as bridges, buildings, and other structures. These can then be used to earn resistance points. However, you can’t complete all three regions at once. So you have to plan ahead and complete one region at a time.

Prepper Stashes in Far Cry 5 are hidden caches that contain cash, perk magazines, vehicles and more. They can be found in the fictional Hope County area. You can find a Prepper Stash east of Clagett Bay near Dutch’s Island. There are also prepper caches east of Clagett Bay near Dutch’s Island. Once you have collected all of these, you’ll be ready to use them as you see fit.

The first Prepper Stash you’ll want to find is the Dead Man’s Mill in Faith’s Region. Once you’ve reached this location, read the note on the left side of the barred gate and proceed to the nearby building. Climb onto the rood of the barn and then drop the scaffolding and enter through the window. Once inside, look up and look out for a comic book. Flip the switch in order to enter the house of horrors.

Another Prepper Stash is near Ozhigwan Falls, which is in the Jacob’s Region. Head eastward from the main path and you’ll find a brown signpost. Head over to the Prepper Stash through a grapple point. There’s a key card inside and the Prepper Stash will be right there. While searching the area, you’ll want to avoid approaching the group of cultists.